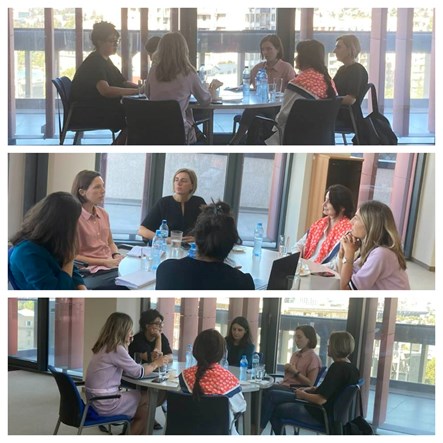 The working group members discussed updates on gender equality laws and policies in Georgia, the implementation process of the GEWG workplan, as well as exchanged ideas around the following topics:

1. The declaration on gender equality and women's economic empowerment-which aims to formalize the commitment of IC member BAs/IFIs towards gender equality;
2. Gender responsive public procurement – in cooperation with the GEC of the Parliament of Georgia, GEWG is researching international practice around gender responsive PP, as well as the practice of certifying businesses as "women owned";
3. 9th Recommendation of the EU- One of the twelve recommendations of the European Union to Georgia is to "notably consolidate efforts to enhance gender equality and fight violence against women". In order to fulfill the 9th recommendation, national gender equality mechanisms (Gender Equality Council of the Parliament and Inter-Agency Commission for Gender Equality) came up with a draft roadmap of priority issues to be addressed before the end of 2022. The IC gender equality working group members discussed the GEWG’s possible contribution to this process.